Home > To see / To do > Saint Bernadette > Bernadette

Bernadette Soubirous, whose real name was Marie-Bernade Soubirous, was born on 7th January 1844 in Lourdes, and died on 16th April 1879 in Nevers, and is a French Catholic saint.

Bernadette Soubirous, whose real name was Marie-Bernade Soubirous, was born on 7th January 1844 in Lourdes, and died on 16th April 1879 in Nevers, and is a French Catholic saint.

The eldest daughter of a family of millers, who suffered extreme poverty after the arrival of the steam mills, Bernadette Soubirous was welcomed in January 1858 to the Hospice of Lourdes run by the Nevers Sisters of Charity, in order to learn to read and write in preparation for her first communion. 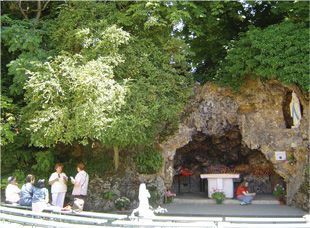 In February 1858, while she was collecting wood with two other little girls, the Virgin Mary appeared to her in the hollow of the rock in Massabielle, near Lourdes.

Responsible for transmitting the message of the Virgin Mary, and not for making people believe, Bernadette resisted the multiple accusations of her contemporaries.

In July 1866, wishing to realise her desire for a religious life, she joined the Nevers Sisters of Charity in Saint-Gildard, the Mother House of the Congregation.

She lead a humble and hidden life there. Although she became more and more ill, she completed the tasks entrusted to her with love. She died on 16th April 1879.

Her perfectly preserved body has been at rest since 1925 in a glass and bronze shrine, in the chapel.

Every year, thousands of pilgrims and visitors from all over the world come to Nevers to receive Bernadette's message.

Nevers is part of the association of Villes Sanctuaires, or Sanctuary Towns, in France which aims to improve the welcome for tourists and pilgrims. Official site of the villes sanctuaires.
Nevers is one of the towns that makes up the association: