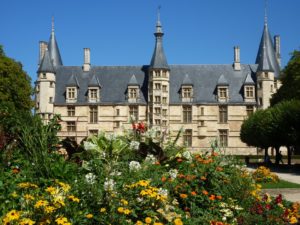 The Palais Ducal, considered as one of the leading Loire châteaux, was the residence of the counts and then the dukes of Nevers. Built in the late 15th century, it now houses the town's exhibition and reception areas, the council chambers and an amazing aquarium containing Loire fish. Access to the Palais Ducal is via Sabatier Street.

Initially the château stood on the site of the current Town Hall. It was built by Pierre de Courtenay.

The present Château dates from the second half of the 15th century, based on a decision by Jean de Clamecy (Count of Nevers), who inherited the Never earldom following the death of his father Philip of Burgundy. Later the De Clèves and Gonzague families succeeded to the head of the duchy, and embellished the building with, for example, the many sculptures that adorn the south facade. In 1609, an esplanade was added, offering a wide panorama over the Loire. It was not finished until the early 19th century.

In 1659, Charles de Gonzague sold the duchy to Le Mazarin, the Mancini inherited it and kept it until the Revolution. The last Duke's heiress sold the château to the town and the département in 1810.

In 1850, it became home to the Palace of Justice, and it was not until 1980 that the town took back control of the monument. The Palace of Justice then moves into the former Episcopal Palace. Various works took place to make the building more functional. The main entrance was created on the west side at lower ground level, which is now home to the Tourist Information Office.

Effectively classified as an Historic Monument in 1840, the Palais Ducal is a vibrant place. Many exhibitions, receptions, meetings, and conferences take place there every year.

53 metres long and 11 metres wide, the Palais Ducal has a unique architectural composition! The medieval round towers frame the south facing building. 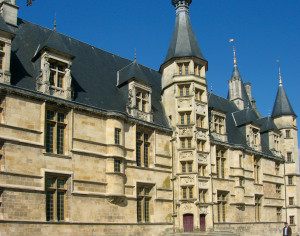 Various heritage based events are organised by the Association terroir et patrimoine:  find out more about the Nièvre site in Burgundy