The Cathedral of Saint-Cyr-and-Sainte-Julitte in Nevers is a Romanesque catholic cathedral, located in Nevers in Nièvre (France). It is dedicated to St. Cyr, martyred at the age of three, in 304, and to his mother St. Julitte. It is also a French national monument, located in the town of Nevers. It is the seat of the diocese of Nevers.

The Cathedral of Saint-Cyr-and-Sainte-Julitte in Nevers is a Romanesque catholic cathedral, located in Nevers in Nièvre (France). It is dedicated to St. Cyr, martyred at the age of three, in 304, and to his mother St. Julitte. It is also a French national monument, located in the town of Nevers. It is the seat of the diocese of Nevers. 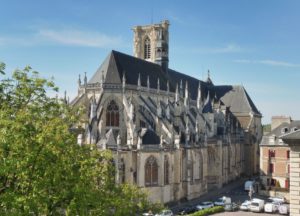 The Cathedral of Saint-Cyr Sainte-Julitte, located in rue du Cloître Saint Cyr, has the unique feature of two opposing choirs, one Romanesque and one Gothic, a result of the juxtaposition of successive buildings. From the first construction to the current ornamentation, nearly 15 centuries of history are expressed through this building.

From the creation of the Nevers bishopric in the 5th-6th century, only the remnants of a baptistery remain, used, as its name indicates, for the baptism by immersion of the first Christians. The white outlines can be seen in the northern part of the ambulatory.

In the first half of the 11th century, a Romanesque cathedral was built, with a west-facing chancel adorned with a 12th century fresco. Recently restored, this fresco, whose subject is taken from the Apocalypse according to Saint John, is considered one of the largest covering frescoes.

Between the 13th and the 16th centuries another cathedral in the Gothic style was added to still standing Romanesque parts, with the choir rebuilt in a Gothic style becoming ‘radiant', testifying to the evolution of the architectural style. In the 15th century the chapels of the lower sides were created, the Boyer tower was erected in the 16th century. It is decorated with statues more than 3 metres high representing characters from the Old and New Testaments.

Listed as an historic monument in 1862, the cathedral has undergone various restorations. It was the 20th century and especially the Second World War that marked it most. A bombing between 15th and 16th July 1944 caused serious damage to the Gothic nave and chevet.

The creation and installation of contemporary stained glass windows began in 1977 and ended in 2011. This ensemble, the largest in Europe with 130 bays and 1052 m2 of windows, was created by the artists Jean-Michel Alberola, Gottfried Honegger, François Rouan, Raoul Ubac and Claude Viallat together with various master glassmakerss. 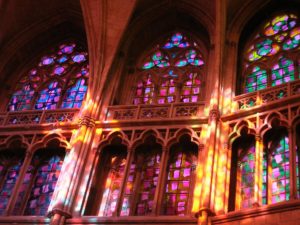 Now you can discover them, you may like them or hate them, but you can be sure they will leave an impression on you !! 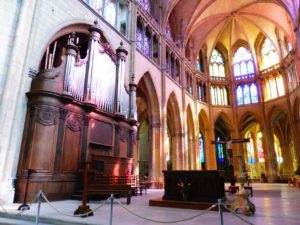