Home > To see / To do > Heritage > The Church of Saint-Pierre

The Church of Saint-Pierre

The Church of Saint-Pierre is a catholic church located in Nevers, at the junction of rue des Ardilliers and rue de la Préfecture.

The Church of Saint-Pierre is a catholic church located in Nevers, at the junction of rue des Ardilliers and rue de la Préfecture. 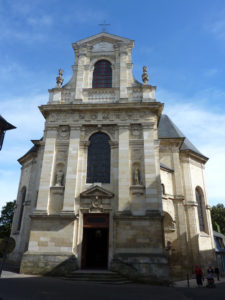 The Church of Saint-Pierre, located in rue des Ardilliers was built in the Classical style, and dates from the 17th century. Shortly after their arrival in the town's former college, the Jesuits enlarged the buildings and created plans for a new church, larger and more convenient than the chapel they had. The new building was built between 1612 and 1653, except for the portal, which was completed in 1676.

On the front there are 2 niches housing the statues of the Virgin and Saint John the Baptist, the former patron saint of the church, and above you can see the instruments of the Passion: the spear used to pierce Christ's side, the whip used in the Flagellation, the sword of Peter, the crown of thorns, the priest's chalice and paten, the hammer and pincer of the Crucifixion, the dice belonging to the soldiers who drew lots for Christ's tunic and finally the cockerel of the Denial of Saint Peter. The trompe l'oeil frescoes were created at the end of the 17th century by Bolognese painters. One can admire the Ascension of Christ, the Assumption of the Virgin Mary and the glorification of St. Francis Xavier (patron saint of the Jesuit order). 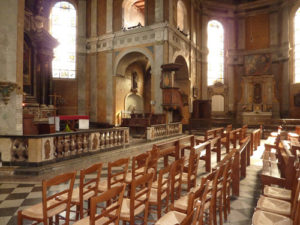 The church has been listed as an Historical Monument since 1975. 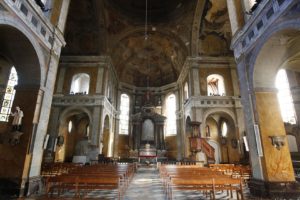