Home > To see / To do > Gastronomy > The Specialities

Our mouthwatering specialities are as varied as they are delicious! And the drinks here leave nothing to be desired: our craftsmen brew up the most exquisite and refreshing beers.

Our mouthwatering specialities are as varied as they are delicious! And the drinks here leave nothing to be desired: our craftsmen brew up the most exquisite and refreshing beers.

The Négus: The Négus is a soft caramel chocolate coated with a sugar syrup. It was created in 1902 by the Maison Grelier following the official visit to Nevers of the ruler of Ethiopia: the Négus. Indeed it was customary at the end of each year to create a new sweet which was named after an event or something notable that had taken place during the year.

It is on sale at: Confiserie Au Négus

Nougatine: Nougatine was invented more than a century ago by Jean-Louis Bourumeau. It was the Empress Eugenie who was responsible for its success. Having discovered the sweet during an official visit to Nevers with her husband, the Emperor Napoleon III, she ordered large quantities on her return and introduced Nougatine to all of Paris.

It is on sale at: Etablissement Desenne / the Tourist Information Office shop

Les Pavés de la route Bleue, The Paving Stones of the Blue Road: Created as a tribute to the N7 motorway,this little praline made of hazelnuts, milk chocolate and nougatine will surely make you melt!

They are on sale at: Les Craquants du Val de Loire

The Faïençon:Small macaroon-shaped chocolates with an ivory coating with the dominant colour of Nevers earthenware and topped with a hazelnut almond praline with caramelised, crystallised cocoa bean chips 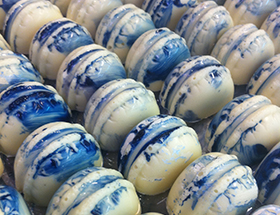 They are on sale at: Pâtisserie A la tentation

Bière Duc'ale: it is also called ‘Nevers Beer', blonde, slightly golden, with 7% ABV. There are 8 other beers to discover at the Rur'ale!